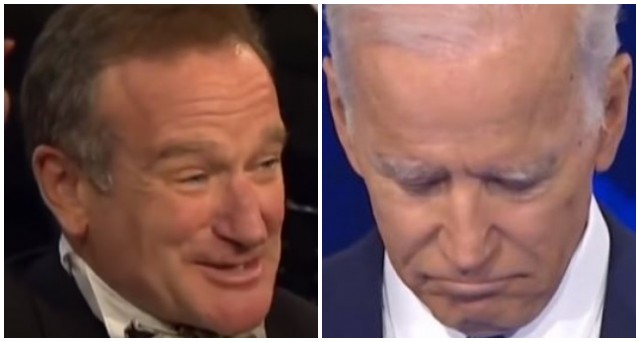 By Leisa Audette at 100 Percent FED Up –

A video from 2009 of comedian and actor Robin Williams’ HBO special “Weapons of Self Destruction” went viral after it was posted to Twitter. Williams calls out Biden for his gaffes saying Biden is “rambling” at speaking events.

Way back in 2009, even the left knew Joe Biden was a flake. It’s unbelievable that Biden was a heartbeat away from being POTUS.

“We still have comedy though, we still have great comedy out there. There’s always rambling Joe Biden. What the f**k. Joe says s**t that even people with Tourette’s go, ‘No, no. What is going on?’”

How could Democrats vote for this incapable candidate? For the same reason Barack Obama chose him as VP?

The gaffes from Joe Biden are best displayed when someone else repeats the nonsense he delivers. It brings into focus the absolute disconnect between Biden’s brain and his mouth. It’s also why the video below is a must-watch and share.

The Daily Caller video below begins with a clip of Joe Biden garbling his words but then switches to a tough-guy character in a black t-shirt who recites Biden quotes like it’s poetry. It’s frightening because it’s so hard to believe that this candidate is the frontrunner who may win in November. The video is also funny because of the set-up of the background music and ‘Noir’ lighting.

How can any American consider voting for this man?

This article originally appeared at 100 Percent FED Up and was republished with permission.

*This article may not be reprinted without expressed permission from 100 Percent FED Up.

Right Wing Tribune Is Proud To Be Listed As # 16 On The Top 40 Conservative Political Blogs!